The Holy Spirit's love for a widow

The Holy Spirit has a great love for us. He desires us to be in union with Him and the Father and Jesus. He will go to great lengths to bring that Joy to those without it, especially for the widows and orphans. He did just that for a widow named Delfilia and her children. He called us to participate in bringing her the Good News that she is loved! 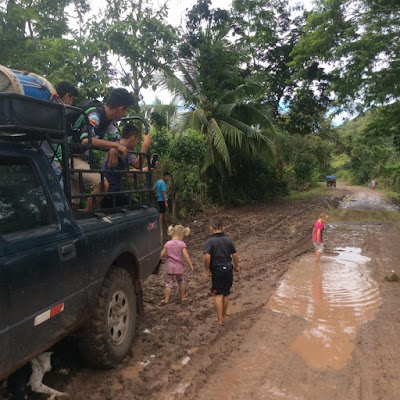 On Saturday, April 20 we were told there was a widow with young kids living in Fortaleza. We were told she was poor and she was in need of help. Fortaleza is a pueblo in one of our valleys which we hadn't visited yet. We knew that we had to schedule a visit soon so we could search for this woman and her children.

Sunday morning when we awoke we could feel that the Holy Spirit desired us to go in search for her that day. As we prepared breakfast we also started packing care package bags. We searched through the generous donations from Brillion and Reedsville, which friends from Holy Family Parish brought down in February. We grabbed some stickers, rosaries, and prayer cards to also include in the bags. We quickly prepared for mass and we headed out the door.

We had the blessing of attending mass in Porvenir a pueblo in the same valley as Fortaleza. Due to heavy rains the road was muddy in many spots but the worst part was right in front of the church. We had to walk through it to get to the church. Needless to say our little piggy, Adele, was more than pleased by this. In fact she squealed with delight when we told her to walk through it. We took off our shoes, hiked up our pants and skirts and squished through the mud. When Padre Paco arrived he shouted out his window if anyone wanted to carry him, no one took him up on that offer. He too trudged through it. 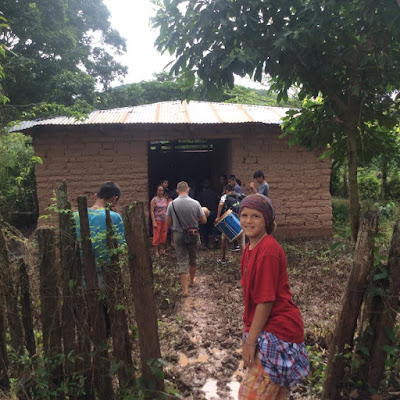 After mass we headed to the truck to make our way down the road to Fortaleza. This time the kids took time getting nice and dirty. Why did they need clean clothes anymore mass was done? A quick wringing out of the clothes and we headed in the direction on the pueblo.

As we were on our way we said a prayer to the Holy Spirit to guide us to the woman who needed His help. We had hope that we would find the woman in need in the pueblo without a problem.

We drove through Nuevo Trujillo and Firmesa, the two next pueblos in the valley, both of which we knew. We were excited to travel further up the valley. The road was surprisingly nicer than some roads along the Huallaga. There were only to washouts from mudslides but both were easily manageable. Scattered along the drive were an occasional house on a family farm or chacra. The views grew more beautiful as the drive went on.

After driving an hour we were starting to wonder when we would come to Fortaleza. Then the thought of finding one family in a town with no name to go on hit us. How would we find here? The only description we had was she was a widow and mother. We had no first name nor last name, we didn't know her age, how long she had been a widow or even how many kids she has. How can we help someone that can't be found?

Again we said a prayer to the Holy Spirit to lead us to her. We prayed he would guide us and to show us the way. As we came around a bend we saw a house with a woman drying her coffee in the sun. She was turning it over on the big black tarps using a rake so it would dry thoroughly. We felt the need to stop and to ask for directions. We pulled off the rode and stopped next to her. As we explained we were looking for Fortaleza she said we had just entered the start of the town. We then went on to explain we are catholic missionaries searching for a widow in the town. Someone had mentioned there was a widow living there and she was raising young children. We had the desire to find her and to give her some clothes for her family. At that moment a smile crossed her face. She explained she was a widow raising her four children and her grandchild. We immediately started praising God. The Holy Spirit led us to her front door.

As she led us to the back of her house we introduced ourselves. Her name is Delfilia and she is forty-two years old. The moment we turned the corner our breath was taken away by the beauty of the scenery surrounding her house. Her house was placed on the top of the valley. Below were flowers and trees. The landscape was dotted by their cattle. The sun and the shadows played beautifully on the mountain across the way. God blessed her with this gorgeous view.

We sat and chatted as our children explored the landscape and played with her young son and grandson. Her older children we down in the chacra working. Delfilia explained her husband passed away in January after a three year long deterioration after a fall from his horse while working in the chacra. She was now left alone to raise the children, to work the chacra and to sell their produce. She confessed that she did not know how she could do this all by herself. She felt overwhelmed. She was alone and all the children depended on her. The weight of all of this was suffocating her. It was then that we shared she was not alone.

We explained that God truly loved her. That he had sent us in search for her and because of Him we found her. We had brought clothes for the children, which she confessed they needed, but that we were also bringing the Good News and the love of Jesus to her as well. Jesus sought her out with the help of the Holy Spirit. He wants her to give the pain and the worry to Him and He wanted her to know that He will help provide their needs just when they needed them. I also explained that she is not the only widow that has had to raise a child bu themselves. I reminded her that Mary also raised Jesus by herself. She took care of him, taught him, dressed his wounds, bathed him and fed him by herself. Mary knows her pain. She knows what it is like to lose her beloved spouse. She knows how hard it is to make sure all of the child's needs are met and how exhausting it can be. But Mary trusted that God would take care of everything, she need not worry. She could raise Jesus in faith that everything would be alright and Mary would walk alongside Delfilia just as she did for Jesus on his way to Calvary.

Delfilia thanked us for the visit. She was happy to know that we are here praying for her. We begged the Lord for a few days without rain so she could dry her coffee. We invited her to visit us when she is down buying supplies in Buenos Aires and promised we would return again.

Delfilia has visited us once in our home since April 20th. This time her face radiated joy. She greeted me with a smile. We joked about my prayer since it was not answered right away. In fact it rained again shortly after we left. She said she was doing well and she was thankful for us. We also returned to Fortaleza for a visit on May 12th. Again she had a smile across her face. She was happy. We chatted and she was so gracious to give us bananas. A special treat for our family since they are only grown in the mountains. Maria ate two on the way home.

God loves Delfilia and He stopped at nothing to show her that!
~ Katie