A candle, four airports, and a prayer

Last week we said goodbye to our amazing friends from Holy Family Parish Brillion WI. Ten people came in total, seven were good friends. The three we hadn't met until they arrived ended up being good friends by the end of the two weeks. They came to build two churches but they ended up doing so much more!

When our group arrived at the airport in Tarapoto, some twenty hours and four airports after their journey began, the joy on their faces was amazing to see! Needless to say hugs were exchanged and laughter was heard ringing throughout the airport and the parking lot. At one point we noticed the awkward looking package. When we commented on it we were told that it was our Easter candle. (For those of you who have forgotten the size of the Easter candle please take note of it at the Easter Vigil mass or Easter Sunday mass this weekend. These are not small candles and they do not easily fit into luggage as our friends found out.) Taylor and I never asked for an Easter candle but nonetheless we were happy that they brought one. Now we were just trying to think of where we can put this candle.

Later that afternoon we were told the whole story of the Easter candle. Taylor's great-aunt and great-uncle bought this easter candle in 2010. They intended on lighting the candle for their anniversary every year but they never did. The day before the group was scheduled to leave Lorraine gave the candle to Heidi and asked her to take it Peru. Heidi excepted it and then had the challenge of finding a suitcase to bring it in. Every suitcase she tried didn't work. The candle ended up sticking out about six inches of each one. It was then decided that they would just carry the candle. 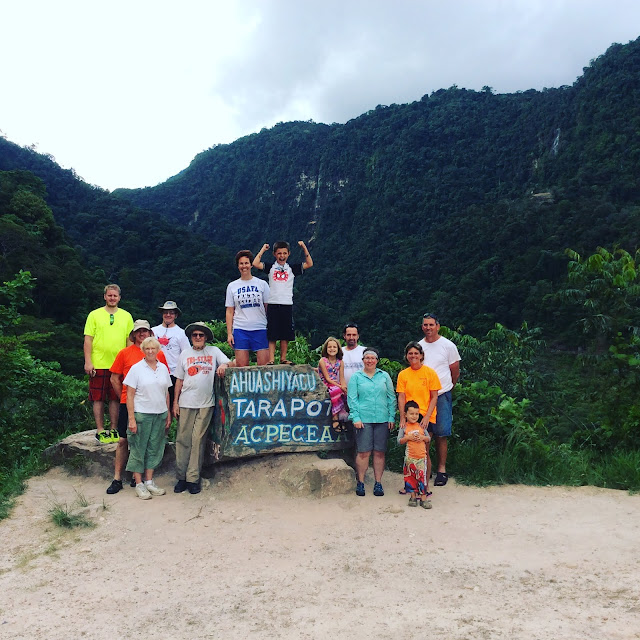 When they got to the airport they were told they would have to check another bag if they wanted to carry the candle on. After talking it over they decided to check an extra bag and carried it onto the flight. During security the candle was flagged as a suspicious device but once it was determined to be a candle they were able to go through without another problem. The group did note that the handling of the candle was very different in the US compared to Mexico where they had their first layover. The candle was handled more aggressively in the US. It was shoved around in the overhead bin by the airline staff. In Mexico it was handled with great care in security; it was placed alone on the conveyer belt. The airline staff also cared for it gently. The difference between both countries surprised the group.

By the time the group handed the candle to us they were happy to be done with it. Bringing the candle ended up being more difficult and more burdensome than expected so being able to hand it off brought great joy to the group. None of us were aware of what the Lord had planned for this candle. 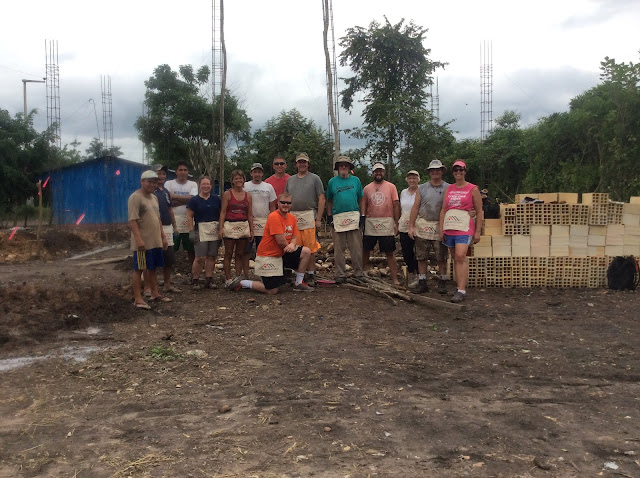 On March 5th we had the privilege of presenting the candle to Padre Leopoldo and Padre Paco. When we brought out the candle to them Padre Paco immediately said "It is the Lord's providence." All of us were quite surprised by this. Padre Paco went on to explain that they didn't have the money to purchase an Easter candle this year and that they have been praying for an Easter candle. They thanked our group for listening to the Lord and said that it will be easy to change the 2010 to 2016.

God answered the prayer of our amazing priests from Spain by some friends of the American missionaries for the people of Picota, Peru.

God does answer prayers. Sometimes it doesn't happen the way you want it, sometimes it is not the answer you want, sometimes it is simply be patient, and other times he answers them through people you have never even met. But God ALWAYS answers prayers.

The rings of renewal


I would like to introduce you to our good friends Daniel and Deni. They are one of the animadores in Nuevo Egipto. Daniel has been a pivotal part of our mission. When Taylor found Nuevo Chimbote Daniel was the one who went with Taylor to go door to door asking if anyone wanted sacraments. Daniel and Deni helped us teach the people of Nuevo Chimbote how to have a Liturgy of the Word service. When we returned to the United States last September Daniel and Deni went to Nuevo Chimbote on Tuesday nights to continue preparing the children to receive the sacraments. They also went to Nuevo Chimbote on Sunday's to help with their Liturgy of the Word service. They are living examples on how to be missionary. Their love for the Lord is evident when you see them. We have been blessed to call them friends. We have enjoyed quiet time sharing what the Lord has done in our life and also listening to how the Lord has worked in their lives.


Daniel and Deni shared their desire to go door to door in the community of Nuevo Egipto explaining the importance of receiving marriage in the church. This is the same thing that Taylor and I shared God asking us to do. We asked them why people don't receive marriage in the church. They explained that people feel it is too expensive to get married in the church. For Taylor and I this was very hard to comprehend because the church does not charge to receive marriage. (We ran into the same issue when we were trying to convince parents to have their children baptized in the church.) We were told that people want to celebrate and have a party and wear a fancy dress. They also explained that buying rings was almost impossible due to the high price.


I can honestly say I laughed when I heard the excuses. I understand that everyone wants the day to be special but I also understand the importance and graces that flow from receiving marriage in the church. Daniel and Deni understand as well. They told us that the excuses were silly and it is something they have been trying hard to get rid of. We talked a little more and decided that Taylor and I would try our hardest to remove as many excuses as possible with the help of Daniel and Deni. Daniel and Deni were going to talk to the community and explain that since everyone would be getting married on the feast of the town's Patron Saint we could have one large fiesta for everyone. That way everyone could split the cost of the fiesta and Taylor and I would supply the cake. We told Daniel and Deni we would supply the rings. We also said that the clothes do not have to be extravagant but white. But first we asked Daniel and Deni if they would like to be the example for the town. Daniel and Deni received matrimony in the church years ago but they did not have any rings. We told them we would give them rings if they would renew their vows in front of the whole community for their 25th anniversary. Needless to say they were ecstatic and quickly agreed. Taylor and I set to work organizing the day and trying to get rings.


I emailed two of my awesome friends back in Wisconsin for some help. They were able to find some rings at an amazing price and purchased a bunch for us to have. Praise God that these amazing friends were coming to build the church in Nuevo Chimbote so we didn't have to ship them. Once I explained to them about the marriage situation here they also went searching for wedding clothes unbeknownst to me. When they arrived not only did we have beautiful rings but a suitcase of white shirts, skirts, shoes, and dresses for us to lend to people for their wedding.


Taylor spoke with Padre Paco to see if we could have their wedding vows renewed while Bishop Demetrio was visiting from Cordóba Spain. He was very excited and agreed. We all thought that since the bishop was visiting more people would be at mass to see them renew their vows. This would help us when we would go door to door asking for people to be married in the church.

On Wednesday Daniel and Deni renewed their vows in front of our amazing friends and a packed church for the bishop. Over the next few weeks we will be going door to door with Daniel and Deni seeking people who want to receive marriage in the church.

Please pray for Daniel and Deni that they may continue to be God's example for their community. Please pray that from their example more people will come into the church. Please pray for our amazing friends from Holy Family Parish Brillion WI who will start heading home tomorrow.

Posted by Schmidt Family at 12:29 PM No comments:

Bringing Down the House 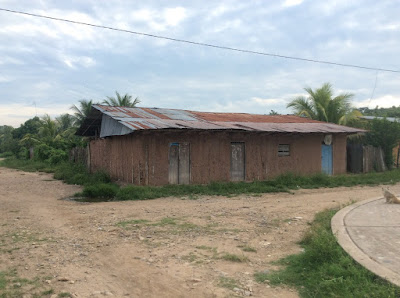 We are so excited to be able to help with this project. Over the past year we have spent two days a week in Nuevo Chimbote teaching the people about Jesus and how to live their faith. They have prepared their hearts for Jesus and now they are preparing a place for Him in their community. 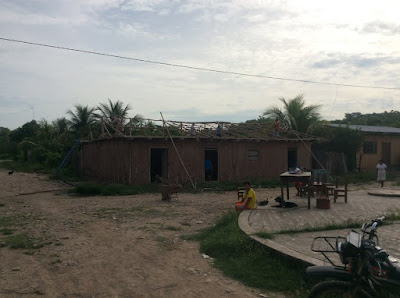 Peru is a catholic nation which has helped in the building of the church. The government has given the community land to build a church. The land which they were given is right off of the center plaza. There was an old mud government building on the land that needed to be removed. Up until this time we have been using this old building to have class and the Liturgy of the Word services. We were also blessed to have mass in the building with Padre Paco. 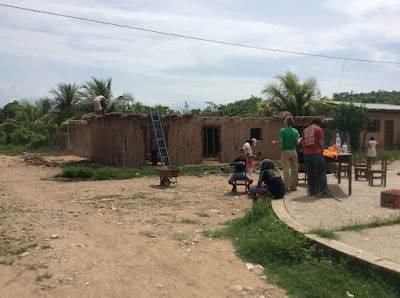 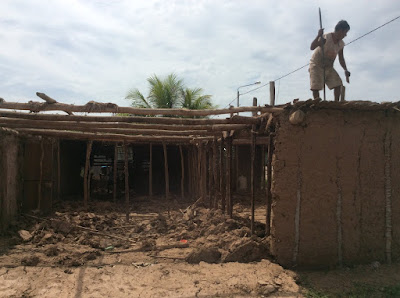 We were given a special treat from the Lord while working, honey. As we started removing the walls we found hives with the delicious treat of honey. The sweet treat was a wonderful gift from the Lord. As soon as someone found some you would hear a shout "Miel" and everyone would go running.

The Lord also blessed us with some beautiful cloud cover to keep the heat at bay. During our break we shared the gospel reading of the day which was the parable of the prodigal son. Taylor encouraged them to continue to seek Christ and to change their life for Him. 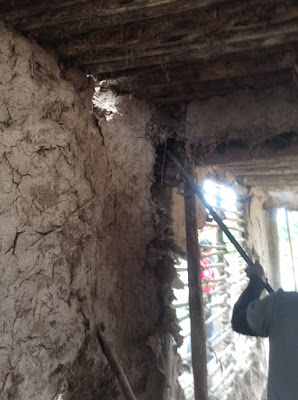 By noon the building was down to the posts. It was amazing to see how quickly we were able to take it down. We will be removing the mud over the next few days and on Monday the build begins. 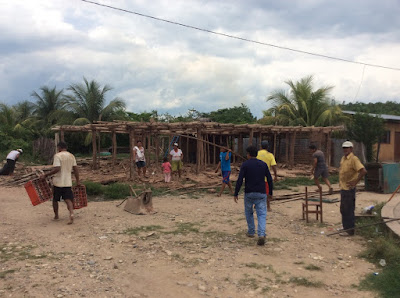