And then Jesus happened! 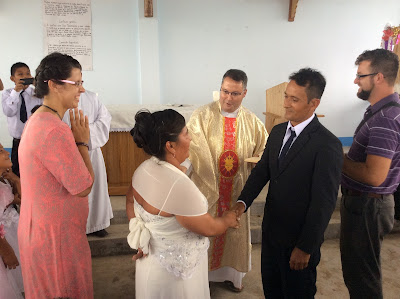 
Lider and Dolly have three children together, two boys and a girl. Lider is 43 and Dolly is 32. When we first came into town sixteen months ago both of them did not have interest in the church, in fact Lider was a drunk. Their relationship was strained. And then JESUS happened!!!

Lider was asked to take on the role of the town animador by Padre and Taylor who had no idea that he was struggling in his faith and a drunk. The animador is the catholic minister in the community. An animador leads the Liturgy of the Word service, visits the sick and dying, and catechizes the community, as well as they are responsible for the security of the chapel and must attend meetings with the priests three times a year. It was through this new role that God called Lider back to Him. 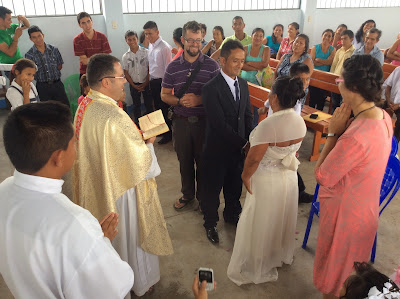 Lider came to every single class that we led every Tuesday evening and every Sunday morning. He started reading his Bible daily. We would spend time having Bible studies together and also we would study our faith. We presented the Kerygma to the community and taught them how to pray. We taught them their first hymns and led them in their first Liturgy of the Word service. For much of the few first months Lider came without his family. He was excited to grow in his faith. He asked many questions and always looked forward to our next visit.

In time Dolly started attending the classes. She would bring their two youngest children. She would come but she wouldn't participate. She was often sitting in the back by herself watching and listening.   At first when we asked if she wanted to get married she said no. It was only a few months ago that Dolly finally shared the reason why she said no.

Over the following months Dolly started participating. She was seen sitting in the front singing and answering questions. She also started bringing more people to the classes. A young man started attending who we later learned was their 17 year old son. She always had a smile on her face and was excited to see our car pull into town. Even a deep wound on her foot from a machete wouldn't keep her away from the church. 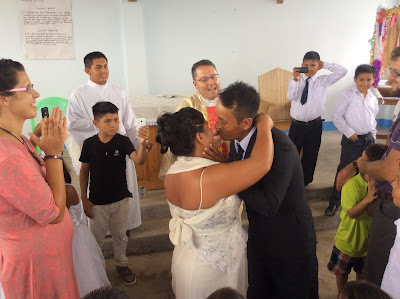 When the chapel was being built Lider spent every day working on the chapel instead of in the rice fields working to feed their family. They knew that God would provide their needs as long as they did His work. Lider also started participating more in the Liturgy of the Word services and the classes. He started sharing what he learned from reading the Bible and children's catechism books with the community. He was also open to the promptings of the Holy Spirit. There were many times that he shared what he felt God was leading him to share and he was no longer shy and timid.

When we asked Lider and Dolly again if they wanted to get married they excitedly said yes. They also said that their children would also be receiving their sacraments. They enthusiastically went to the marriage retreat.

It wasn't until the one year anniversary of our first visit to Nuevo Chimbote that Lider and Dolly shared their testimony. It was then that we learned how much God had done in their lives and how amazing God is. Our God is a Real God who does Real Things for Real People in the Real World. He proved that to them through His faithful love and how He repaired their broken relationship. As I stated above Lider was a drunk. Most of the money he had earned was used to support his habit leaving little to take care of his family. This led to many arguments and a very strained relationship. When we first asked Dolly if she wanted to marry Lider she could only think of these times and all the hurt he caused her. She wasn't ready to believe that his conversion was real and that God could actually change someone. But over those next months Dolly saw that Lider desperately tried to follow Jesus. He gave up drinking and started loving her in ways she didn't know. For the first time she was able to see Jesus in her husband. It was through his witness and his struggles that she came to Jesus. She saw that when he did turn back to drinking he realized his mistake and turne 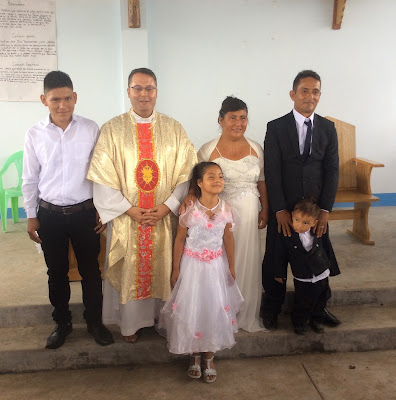 Lider and Dolly joyously came before the Lord to receive the sacrament of marriage because they know what life is like living without Him. They don't want that anymore. They have asked Him into their hearts and to change their person now they were coming before Him to ask Him to change their marriage. They know that God will help them with their struggles and that He will be their faithfully as the center of their marriage. They also have faith that their example will also bring other's to know His saving GRACE!