Truly, I say to you, whoever does not receive the kingdom of God like a child shall not enter it.

We are called to bring Jesus Christ to everyone we meet. This can be done in big ways and small ways. Often it is in the small ways that our children bring Christ to others. Here are a few examples:

The children often carry holy cards in their pockets and prayer bags to distribute to everyone we meet. This is one of their favorite things to do. “Everyone we meet needs to know who Jesus is” is their reason behind handing out the prayer cards. If everyone gets one then we have done our job. Their goal is to give away all of their cards by the end of the day. If they haven’t done so they get upset because they think that they might have missed people and have let Jesus down. We kindly explain that is not the case. Jesus loves the work that they do by handing out the cards and everyone that needed one had received one that day. Tomorrow is a new day with more opportunities to share about our Savior!

The kids really had fun distributing the cards at the airport. There were so many people walking around. Everyone close to the kids received one including the people working in the airport. Leo had a big impact on two such workers. We arrived into Lima at midnight on our way to the States. While we were waiting for our luggage Leo went over to two workers and gave them a prayer card. They took the card and walked away. At some point they must have realized what it was because just as we were walking to customs they ran after us. They asked us to stop and wanted a picture with Leo. Leo was grinning from ear to ear. As they knelt down they said thank you to Leo and took a picture. 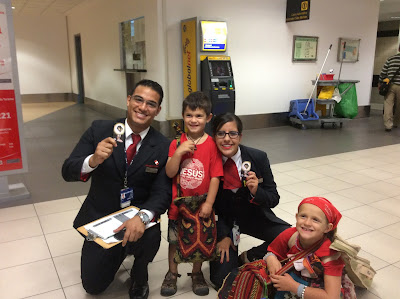 Sometimes simply praying for someone in the moment can bring someone closer to Christ such as this experience. When we first arrived back in Wisconsin dad had a cough. Ruth heard him cough while she was eating breakfast. As soon as she did she stopped eating and said “Let’s pray over grandpa so God can heal him.” All of the kids ran over to him and laid their hands on him. They then asked mom to come over and lay her hands on him as well. They prayed that God would heal him of his cough and make him feel better. After the prayer the kids went back to eating breakfast. Ruth stopped eating a little later and said “ If it doesn’t work right away that doesn’t mean that God isn’t going to heal you. Sometimes God doesn’t heal you grandpa because you might have to suffer and offer it up for someone else.” She then went back to eating.

Sharing your testimony is also a simple way to share the Good News with others. Malachi has been given this such gift. Throughout our time in the States Malachi was able to share this verygift. One such occasion was when we were asked to share at Peace United Church of Christ. As Carol Lowe was introducing our family she asked the questions “ What is missions and who are missionaries?” Malachi stood up and shared with the congregation that missions is bringing Jesus to the poor and those who do not know Him. He shared that we are all called to be missionaries and that they can be missionaries right where they are. They just need to go and do it.

“ Truly, I say to you, whoever does not receive the kingdom of God like a child shall not enter it.” Luke 18:17

God can use everyone to bring His Good News to the world! You just have to be open to His will!